The holiday of Sunday

“Millions long for immortality who don’t know what to do with themselves on a rainy Sunday afternoon.” – Susan Ertz

Sundays are an odd thing. Throughout most of my life, Sunday was the dreaded day of the week wherein I would wake up late, vary between unsatisfying procrastination and lazily doing leftover schoolwork all day, and finally eat dinner with the family. The day was always cast under a bitter cloud, darkened by the impending misery of Monday morning, that approached faster than a child, and especially a teenager, could handle.

University brought little change to my attitude towards Sunday. The routine, however, was composed of yet more procrastination, and an extraordinary, weeks-worth of guilt for not feeling productive enough, while snacking on comfort foods and questioning every choice I’d made in life up until that point. All this before resigning myself to bed at a ridiculous hour under the false pretence that I could somehow delay Monday morning by delaying going to sleep.

Yesterday marked three months since my arrival in Rennes, and today I’ve found myself reflecting on how my lifelong dispute with Sunday has changed while living in France.

Place de la Mairie as the evening sets in.

Today there is no guilt, despite the deadlines coming up before the holidays. There is no misery, despite having class at 8am on Monday morning for the first time since high school. Perhaps it comes with knowing that, as most businesses and offices are closed (except some cafés and bakeries, and only for some time of the day), most everyone has taken the day for themselves. In the past, I’ve remarked on the amount of folks that are out walking along the Vilaine river, or relaxing on benches in Parc de Thabor, seemingly without a care, and I’ve begun to appreciate a day to slow life down as well.

During past Sundays in Rennes, I’ve found myself at a bakery for a croissant before walking around the centre to take photos, or had brunch with friends before going to relax in a park. Today, however, I stayed in to relax from a weekend of walking around town and enjoying what it has had to offer.

I saw a certain Picasso painting, that was featured in Midnight in Paris, at the Musée in Rennes, and now have a postcard of that same painting in my room. Credit: Sony Pictures Classics.

After only three months, on Friday I finally made it to the Musée des Beaux-Arts to see their impressive collection, before wandering the centre of town. It may only be the beginning of December, but the holidays have really begun to be felt here. Over the course of the past two days, the streets have been full of cheerful shoppers, peering into windows for gifts and ideas, and the Marché de Noël has already been up a week.

I have to stop thinking about all the amazing food, or I’ll be back there everyday.

Yesterday, I found myself there for the third time for yet another cup of Vin chaud, or hot/mulled wine, from the Canada stand (though almost every food stand sold it as well), followed by a bretzel with Emmental cheese. My new favourite holiday beverage, mulled wine has counterparts in most Slavic, Nordic, Germanic, and well, almost all countries of Europe. Soon after, the christmas lights that have been hanging for some time, were lit, illuminating the cobblestone pedestrian streets of Rennes. 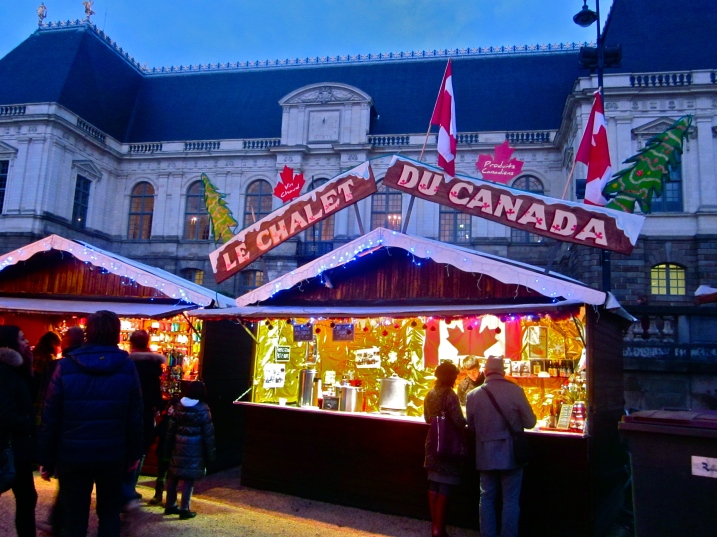 The only stand dedicated to a nation… and it’s Canada.

And so, after a weekend out and around the city centre, I took today to relax with coffee, Rainymood, and some music, while organizing what needs to be done this week. Though I’m less than excited about my upcoming week of analyzing a 139-page ruling from the International Court of Justice, before writing a 10-15 page paper on the subject for my class Droit international public, I’m not overwhelmed or worried either. Because this is Sunday, a day to relax and enjoy myself, rather than feel miserable and guilty, before the real world comes rushing back to greet me on Monday morning.

5 Responses to The holiday of Sunday